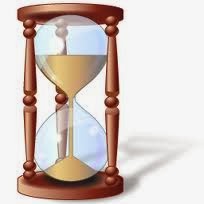 One night last week as I was making dinner, I was overcome with a feeling of deja vu, or perhaps you could call it nostalgia. My husband wasn't home, and with the exception of our two cats tussling around a bit, it was just me at work in the kitchen. As I was chopping up vegetables, I was suddenly whisked back to a time around 26-27 years ago when I was also making dinner. I was in our old house in Seattle, and my husband wasn't home yet; it was just me and our dog Wilbur. It was fall. I had a cookbook open and I was making a hearty minestrone soup. The house was quiet and I had just come home from work. My husband was finishing up his senior year at the University of Washington. All four of our parents were alive and well. Our children, those amazing beings that have provided such meaning to our lives, were not yet even specks of dust.

Where has the time gone? How can it be that I'm 54 now, when I don't feel that old? In fact, when I think back to that time 27 years ago, I realize that I'm older than my own parents were, and just a bit younger than my husband's parents. And yet why do they seem so much wiser?

I have a vague memory of who I was as a 27-year-old. I was definitely a work in progress, as many of us are in our 20's as we try and figure out who we are and our place in the world. I had been out of school five years, and motherhood was still two years away. I managed a Member Relations Department for a small HMO and volunteered as a counselor at Planned Parenthood. I was in a book club, we went to art movie houses, and on the weekends we hiked in the Cascades.  We had a group of friends that we are still close to today. My kids are now in their early 20's and they, too, are in the process of figuring out who they are. Matthew would have turned 25 this coming January. By the time we were 25, we had been married for a year.  Time is such an elusive concept. People far more intelligent than me have spent years trying to understand and explain it. But my point is just how quickly it is all going.

Sometimes I see a young mom with the same configuration of kids as ours--two little boys and a baby girl. I always sneak an extra glance in their direction, as I'm flooded with memories of my own kids. Those weren't the easiest of times, especially when I had three kids under the age of five. But of course, looking back now from my mature vantage point, I want to reach over to that mom and gently touch her arm and tell her to savor these moments. I want to tell her that it passes by so quickly and that before you know it they will be teenagers and soon after that out of the house. But of course, I know how unappreciated comments like that are when you are at the center of the vortex of child rearing.

I think what drew me back to that particular moment in the kitchen last week was the stillness of the house. As anyone who has kids knows, there is no stillness when you have children. For so many years our house was full of noise and laughter and tears and commotion, and now it's quiet again. When I leave the house to go to work, it is in the same condition when I come home. Towels are on the rack, dishes are in the dishwasher, and beds are made. When I come home from work, my evening is my own (along with my husband). I can read a book, I can watch a show, I can go to a lecture. Dinners are less of a production and yes, I will admit it, after years of always insisting we sit together at the table as a family, we will now often eat in front of the TV.

Much has been written about the empty nest. I've read some beautiful, heartfelt essays about it and have welled up in agreement. The chapter of active child rearing closes, and a new one begins. That's the way it should be. That's what we aim for when we take that commitment to have children. We want them to be independent, contributing members of society...and we want them to be happy.  My kids are making their way in the world, which is as it should be. It hasn'y been easy for them these past three years after losing their brother, but I'm proud of who they are.  I look forward to seeing what they will do with their lives, and I'm learning to let go as they make their own ways. I'm also learning to reclaim my own life as I enter this next chapter.

Below is one of my favorite Linda Pastan poems which beautifully captures a moment in time. I hope you enjoy it:

It was early May, I think
a moment of lilac or dogwood
When so many promises are made
it hardly matters if a few are broken.
My mother and father still hovered
in the background, part of the scenery
like the houses I had grown up in,
and if they would be torn down later
that was something I knew
but didn’t believe.  Our children were asleep
or playing, the youngest as new
as the new smell of the lilacs,
and how could I have guessed
their roots were shallow
and would be easily transplanted.
I didn’t even guess that I was happy.
The small irritations that are like salt
on melon were what I dwelt on,
though in truth they simply
made the fruit taste sweeter.
So we sat on the porch
in the cool morning, sipping
hot coffee.  Behind the news of the day—
strikes and small wars, a fire somewhere—
I could see the top of your dark head
and thought not of public conflagrations
but of how it would feel on my bare shoulder.
If someone could stop the camera then. . .
If someone could stop the camera
and ask me:  are you happy?
perhaps I would have noticed
how the morning shone in the reflected
color of lilac.  Yes, I might have said
and offered a steaming cup of coffee.