You gain strength, courage and confidence by every experience in which you really stop to look fear in the face. You are able to say to yourself, "I have lived through this horror. I can take the next thing that comes along." You must do the thing you think you cannot do.
- Eleanor Roosevelt 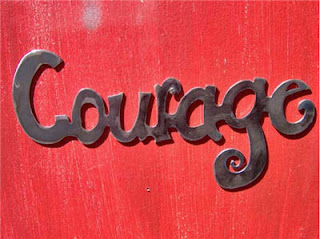 This past week has been difficult for so many on the East Coast, and it will be quite a while before life returns to some sort of normal. Like most of you, I've been riveted to the t.v., first watching the storm approach, and then its destructive aftermath. These past four days have shown us the incredible power that nature can indiscriminately heap upon us, balanced against the equally formidable bonds of humanity.  As the stories of the storm begin to emerge, I'm struck by how people are coming together to help one another. I think we are witnessing human nature at its finest.

I am also struck by the courage displayed by so many.  I think initially when we think about courage we think of it in the context of heroic deeds done on a grand scale, and we've certainly seen some of that this past week. But I don't think that courage is just about being a superhero. I think courage manifests itself in many ways (big and small) throughout our lifetime. At different points we're all called upon to summon up "simple acts of courage."  For instance:

I think about first-time parents bringing home their baby and wondering if they can really do this. Can they really raise a child in a world that often seems so out of control and fraught with danger? This takes courage.

I think about the young child venturing to kindergarten for the first time leaving behind all that is safe and secure as he takes a first step into the world away from mom and dad. This takes courage.

I think about the middle schooler dealing with body changes and the cruel taunts that often accompany adolescence as she learns to maneuver her way through the ever-changing social strata of junior high. This takes courage.

I think about the high schooler that comes out to family and friends, knowing that he or she can no longer live a lie. This takes courage.

I think about all of the families who have struggled during these days of hard economic times to pay the bills and put food on their tables, while still maintaining their hopes for a better future. This takes courage.

I think about the newly divorced mom who wonders how she can make ends meet when her income has been cut in half, and she feels cut off from a world she once was a part of.  This takes courage.

I think of all those people who struggle with an "invisible" disorder like heart disease, diabetes, arthritis, fibromyalgia or MS. It can be an effort just to get through the day and manage the pain and/or illness. This takes courage.

I think about people awaiting results from a medical procedure. The days of anxiety and worry that reach out and grip them. Yet they continue on, going to work, folding laundry, making dinner. This takes courage.

I think of the people who are in the midst of dealing with cancer treatment. The physical toll it takes on their bodies, the mental anguish it exacts and yet they continue on making sure the kids get off to school, paying the bills, keeping the house clean. This takes courage.

I think of bereaved parents who have to get up every day and face a world without their child. We have to rely on the memories of who our children were, instead of a future that includes them. This takes courage.

I think of newly widowed men and women who after years together as a couple now face a life without a partner. This takes courage.

In the course of our lifetimes we may or may not be presented with an opportunity to perform a truly courageous act along the lines of Oskar Shindler or Rosa Parks or some of the men and women in Hurricane Sandy. But  I think we also need to recognize that just living often requires courage. The courage to face a new day infuses us with the will to carry on despite the obstacles in our way. It's these simple acts of courage that hold together the seams of our lives.