Always in the deep woods when you leave familiar ground and step off alone into a new place there will be, along with the feelings of curiosity and excitement, a little nagging of dread.  It is an ancient fear of the unknown and it is your first bond with the wilderness you are going into.  What you are doing is exploring.
Wendell Berry 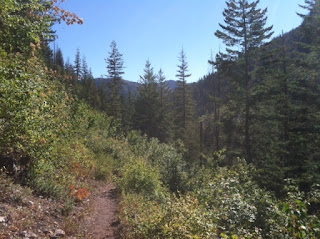 Tomorrow marks the second anniversary of Matthew's death. In some ways it's hard to believe that two years have passed, and in other ways it seems like the longest two years ever. Whichever way I look at it, it doesn't seem fair. As anyone who has ever lost a child will tell you, there's no making sense of something so out of the natural order of things.

As you might imagine, October takes on a new significance for our family, and it's one I am trying to come to terms with. Two years ago when Matthew got sick, it became the longest three week journey of our lives. From two different ER's to three different hospitals, to ICU's, to a long open-heart surgery and to a week in a coma, it was beyond anything anyone could have prepared us for. Last year, as we approached the one-year anniversary, I found myself reliving each day of those difficult three weeks. At any time, I could tell you where we were a year ago, which doctors we saw, the nurses on duty and, of course, conversations with our boy. And while that reliving may have been important to do last year, I was determined not to do it again this year. It's not the way I choose to remember Matthew.

So as we entered the month of October this year, I tried to focus my energies elsewhere. In the beginning of the month, we went on a few walks and hikes in the Olympic Peninsula and on Bainbridge Island, which I found to be incredibly therapeutic. When I'm outside I am so much more able to feel a part of a larger piece of the cosmos. And in turn, I feel Matthew's presence in a way that I'm unable to in my more day-to-day routine. When I'm outside and walking in nature, it's as if the veil that separates us (the living and the dead) is lifted a bit and appears to be more translucent. Everything and everybody appears so interconnected. Life's biggest questions start to reveal themselves to me as I step out in nature.  And while I don't pretend to have any of the answers, I find that oddly comforting. I feel less alone out there.

Further on into October I went to Estes Park, Colorado for work. I was so fortunate that my husband was able to join me for part of this, and we were able to spend time outside with the Rockies as our backdrop.  We were there during elk mating season and the sounds of their bugling reverberated over the rock outcroppings; their echoes filling the thin air with their ancient sounds. We walked amongst scenery dotted with the amber glow of the aspens and saw the first snows of the season deposited on distant peaks. Again, I felt the presence of Matthew. 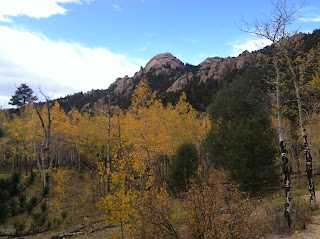 So now we find ourselves in the final stretch and we are in Canada for a few days. The weather is not as cooperative as the beginning of the month, but that doesn't matter. In fact, being outside in the rain and cooler weather seems oddly appropriate. We will time it so that on the 22nd we will be with our other two children up in Bellingham, at the school that Matthew loved so dearly. The four of us will be together, well actually it will be the five of us.

In closing, I want to share a poem that a dear friend of mine wrote upon learning of Matthew's death. Parker Palmer is a founder of the organization I have worked at for the past 14 years. He was leading a retreat for us in Washington D.C. on October 22nd, 2010 and wrote these words which mean more than you can ever know. Thank you Parker.

For Matthew, in Memory and Hope
With great love to Robin, Israel, Jordan and Aviva...

I never met you, Matthew,
but still I weep for you,
knowing you as I do now
through your family's eyes of love.

You died with so much life unlived
no words will ever do. I only want
to promise you that, as we grieve
your absence, we will do our best

to live well for you, to hold with
special care everyone who suffers,
knowing we are one with them, to
be of comfort to your family even

when there is no comfort to
be found, to live our own lives
keen-aware of the precious gift of
life we hold in trembling hands.