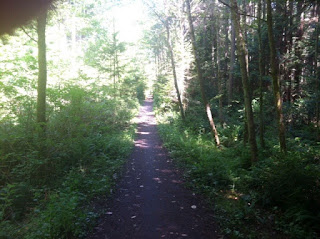 The first week of August hangs at the very top of summer, the top of the live-long year, like the highest seat of a Ferris wheel when it pauses in its turning. The weeks that come before are only a climb from balmy spring, and those that follow a drop to the chill of autumn, but the first week of August is motionless, and hot. It is curiously silent, too, with blank white dawns and glaring noons, and sunsets smeared with too much color. Often at night there is lightning, but it quivers all alone.
~Natalie Babbitt, Tuck Everlasting


It's been two weeks since I last posted. The languid days of summer have taken over and I have found it all too easy to put off tasks like sitting down and composing a blog post. There's a certain feeling in August that engulfs me as I realize that summer is beginning to make its exit and the days are shortening. There's a shift in the air and yesterday as I walked around my yard I felt it. I felt a tinge of fall, even as the temperatures crept towards 80 degrees. I noticed the alders are beginning to drop their leaves, even as the blackberries begin to ripen on their vines. I felt it last night as I took some friends to the ferry and I looked up at the clear, dark sky, realizing that a month ago it would have been light-filled.

August has always made me feel a little melancholy, even though it's the lead-in to fall, my favorite season. When I was a kid, we would escape the stifling Arizona heat by going to Southern California for the month of August. There we would stay outside for hours on end, playing on the beach, boogey-boarding in the ocean, always knowing we were on borrowed time before we headed home, back to our real lives. Now, of course, I don't have a month off, and even if I did I wouldn't want to leave the Northwest. For these are the days we look forward to all year long. These are the days we store in the back of our minds and conjure up when people ask how we could live in such a rainy, gray place. I know the days are fleeting, so I try and stay outside for as much as possible (hence the lack of writing).

One of the things I do is walk. I walk in rain or shine, but especially in shine. I walk with friends, with my husband, with my kids and by myself. And this weekend I did a little of each. I culminated my weekend of walks with a walk with my husband this afternoon.

We went to a place that is quite special to people who live in Kitsap County. We call it Secret Beach, but it's really known as the Hansville Nature Conservancy. It's about a 30-minute drive from Bainbridge Island, on an unmarked stretch of road about five miles past Hansville (you have to look for cars parked along the side of the road to find it). From there you walk about 10-15 minutes through woods filled with red alders, Western red cedar and Douglas firs...


until you get to the most gorgeous, sandy beach with views of the Olympics to the west. 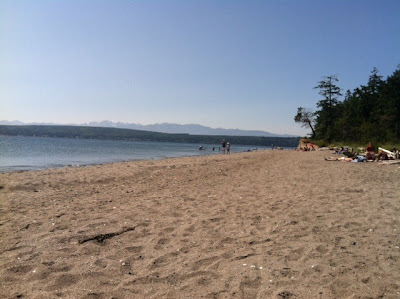 Directly behind is a nature preserve filled with birds. 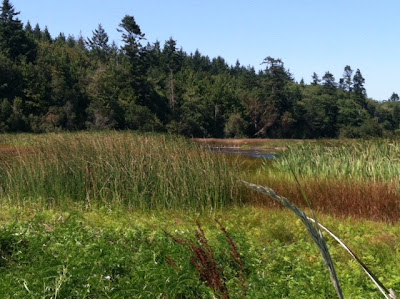 For me, this beach holds special memories. I remember the first time I went there with friends from my son's pre-school. I had 10-month-old Aviva on my back,  while 3-year-old Jordan and 5-year-old Matthew raced through the woods with their friends to get to the beach. It was magical for them to discover the soft, sandy beach laced with driftwood. Forts were built, sand castles erected and a new favorite place was discovered. They couldn't wait to show their dad this amazing "Secret Beach."

Today as my husband and I walked out to it, we talked about all the times we went there as a family. We remembered the picnics, the swimming, the forts and the throwing of frisbees. As I sat on the hot sand my mind drifted over the years, and I was filled with gratitude for the many memories of such a special place for my family. I saw each of my kids at different stages, always playing no matter their ages. When I closed my eyes I easily remembered 5-year-old Matthew, 3-year-old Jordan and 10-month-old Aviva, and with a slight adjustment saw 15-year-old Matthew, 13-year-old Jordan and 11-year-old Aviva.

You always wonder as a parent which memories will stick with your kids. You hope that you are creating special moments for them along the way that they will hold close as they journey through their lives. Of course we all know that memory can be tricky, and that each of us holds different interpretations of the same event. Anyone that has a sibling knows that you always bring a different version of the same story to the table. But for me, as a mother, the times we spent out at Secret Beach will always be some of the most special memories I hold close to my heart.