"The voyage of discovery lies not in seeking new vistas but in having new eyes."
Yeats 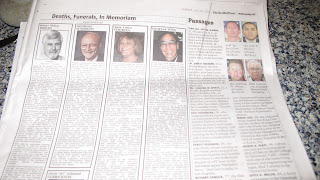 I have been an obituary reader almost my entire life. I started reading them in the sixth grade in Mrs. Seitz's class when we were all given a subscription to the Arizona Republic for a month. The purpose of the assignment was to familiarize us with every aspect of the paper. We learned about editorials, letters to the editor, international/national news, the classifieds, Dear Abby, the sports section and the obituaries.


I don't know what it was that drew me in initially, but I think it was the way a life could be summed up in a paragraph or two. When done well it was amazing what you could find out about a person. I found it fascinating. I can remember especially liking those obituaries that had a picture of the deceased when they were young, as well as one when they were old. I would stare long and hard at the two photos comparing them. I'd  see where the fine features seem to have melted away; the strong jawlines given way to soft jowls. It was the eyes that usually gave them away; I could always see them in their eyes.


Since then I've been a pretty regular obituary reader. During those periods when I don't have as much time, I scan them for the unusual ones--the freak accidents, the very young, and the very old.  Some are brief and to the point, while others are rambling and all over the place. Like life, they are not always written in perfectly punctuated sentences. But they almost always capture some essence of who the person was.


Now, of course, I read obituaries with very different eyes. No longer are they just a summation of a life lived. Now when I read them my mind also goes to those who were left behind. I read the "survived by" with a new found empathy. These are the real people left behind to do the grieving. I take comfort when there are many loving family members listed, or special thanks given to friends and community, knowing that those immediately impacted will be surrounded and nurtured in the days and weeks ahead. I worry about those that, at least in the obituary, don't appear to have much of a support system.


Since Matthew was 21 when he died, I feel a special kinship with the men and women who die in the military. For if you look, they almost always range in age from 19-23. I think of their families who had their worst nightmares come true with that knock on the door.  My heart breaks for them. I sent my son off to university never thinking that an illness would strike him down. They sent their children off to fight for our country, always knowing in the back of their minds that it's a possibility they might not come back.


I don't know if other people read the obituaries with the regularity that I do, and perhaps it seems a bit morbid or voyeuristic to some that I do this. I do know that I read them with compassion, and no longer view them with the detachment I once might have. For me, they serve as a daily reminder of the preciousness of life, and I don't think that's such a bad thing.
Posted by Robin Gaphni at 8:57 PM