Today I had the pleasure of sitting at my son Jordan's game and watching him play baseball up at Western Washington University. It's been five years since I've had the chance to watch him play, and as I sat there in the stands I thought of all of the years I sat on the sidelines and watched my kids play baseball, soccer and basketball. It filled me with warm memories.

The reason it's been five years since I watched Jordan play is that he was cut from the high school team as a sophomore. We were never given much of a reason why, and I will say it was devastating to a kid who loved the game that much. He never wanted to try out again for that coach, and I think he figured his playing days were over. Then last summer when he was home, he played in a men's league and it reignited his passion for the sport. So he went back up to WWU, and tried out for and made the club baseball team. It's been a gift for him to be back playing the sport he loves so much, and I think it's really helped him deal with Matthew's death.

Today as I sat on the cold aluminum bleachers and watched my 6'3" son play, I thought of all those moments as my three kids were growing up that we attended their games and their practices. Sure there was a little grumbling sometimes on my part (mostly if it was cold and rainy), but for the most part it was a joy to sit with other parents and cheer on our kids.

Friendships were made on the sidelines. Some were a given and have lasted over the years. Others were unlikely and lasted a season. But I learned much from my fellow parents and we bonded over our kids' accomplishments and failures on the field.

We watched as they experienced incredible moments of glory, as well as devastating moments of defeat. We hurt when they hurt. We rejoiced when they rejoiced. We cheered them on as they became members of that elite club that included their heroes like Jackie Robinson, Sandy Koufax and Ken Griffey Jr. Baseball is a game of failures and we watched as they learned to accept the failures alongside the rewards. It's a good training ground for life.

So when I see those t-ballers in their little baseball uniforms walking through town in early Spring I can't help but get a bit misty. I remember how proud my boys were each step of the way. From t-ball to coach-pitch to intermediates to majors to Babe Ruth they learned the game better and better as each year passed, and wore their uniforms proudly.

Today I felt nostalgic as I watched Jordan play with his team. It hasn't been an easy route for him, by any means. But I'm happy that he's back playing a game that has taught him (and me) so many lessons. It sure has gone by quickly. 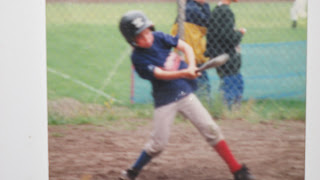